What We Teach
The Beijing Tai Chi & Kung Fu Academy was founded in 1999 by Sifu Jonathan Weizhang Wang. With 18 years of Kung Fu training, Sifu Wang decided to pass on to others the knowledge and skills that he had acquired under both Grandmaster Jiang Hao Quan and his father, Grandmaster Daniel Yu Wang. The goal of the Beijing Tai Chi & Kung Fu Academy is to revive the Nan King Guo Shu Institute’s curriculum and train the most well-rounded Kung Fu artists possible. Kung Fu is a 2000 year old traditional Chinese martial art with approximately 129 different styles. In order to preserve the art of Kung Fu, the Chinese government created the Nan King Guo Shu Institute in 1927. Top Masters in China gathered together to train hundreds of students. These students were required to fully master forms, weapons, fighting sets, freestyle weapons and empty hand sparring before being allowed to graduate.
By mastering a variety of styles, they would carry on the skills, philosophies, and techniques of traditional Kung Fu. Unfortunately, the Guo Shu Institute was destroyed during World War II, and its curriculum was never officially reestablished. Sifu Wang, however, is a product of this curriculum, as he was a student of Grandmaster Jiang who was himself an esteemed graduate of the Nan King school. Grandmaster Jiang strictly followed the Nan King curriculum when training Sifu Wang. His goal, therefore, is to revive this traditional curriculum and continue to produce traditionally trained, well-rounded Kung Fu masters. Sifu Wang strongly emphasizes that Kung Fu should be as effective and applicable as it is beautiful. As he puts it: “Kung Fu fighting techniques are hidden in the traditional forms.”

Kung Fu is good for self-defense, combat, physical and mental health, discipline, and healing the body. To better understand the different aspects of Kung Fu and determine which classes are best suited for your needs, the following is an overview of some of the courses offered at BTKA:

• Good for balance, coordination, and flexibility
• Medium Intesity Workout
• Good for Fighting an opponent from side or behind 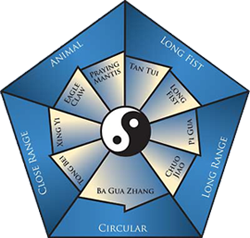 A balanced teaching system results in a balanced Kung Fu student. The BTKA approach, based on the historical Nan King Guo Shu Institute teachings, is to train students in a variety of styles and disciplines. While other schools might focus on one style of Kung Fu, BTKA teaches all of the components necessary: Long Fist, Long Range techniques, Close Range techniques, Circular technique and Animal emulation. This method produces a well-rounded, effective and balanced martial artist that is prepeared for any contingency.

BTKA indoor facility is temporarily closed for now due to the public health crisis.

However, we are currently offering in-person private classes; online private and group classes. Please contact us at jonathan11299@gmail.com to get detailed information.

Thank you very much!